A Novel Approach to Learning

Posted Tue , Jun 29th, 2021 at 1:32 pm
by Ruby Lane
In the annals of the doll business manufacturers have always looked for a competitive edge, something novel that would make their products more appealing to the public. One such story is that of the "educational" doll bodies of Hertwig & Company.

The firm of Hertwig was established in Kutzhütte, Thüringia, Germany in 1864 by Christoph Hertwig and Benjamin Beyermann. A newspaper report on the 1865 Leipzig Fair noted that Hertwig & Company had “luxury items and fancy items, as well as bathing children and doll heads in their display room.”  By 1869 Beyermann had left the partnership and Hertwig’s sons Karl and Friedrich had joined the firm.

Among their other goods, the company would become known for its “Nanking” dolls. The term Nanking, sometimes called Nankeen by other manufacturers, was a name applied to a style of doll made in the last quarter of the 19th century which had a cotton cloth body. The actual term Nanking (Nankeen) is a corruption of the name Nanjing, which is a city in China that originally produced a durable fabric made from unbleached cotton. These dolls were generally more affordable than their contemporaries having kid leather or composition bodies. Their heads were made of chinaware or bisque and tended to be simple in design. In 1883 the company registered their mold 150 China shoulder-head model for use on their “ABC doll body.” This doll was in a style which collectors now refer to as a “low-brow” China doll. Hertwig would offer this basic style of doll from about 1880 until at least 1945.

The cloth bodies for these dolls were made by die-cutting the fabric pieces which were then sewn up by home-workers and returned to the factory for finish assembly into whole dolls. By the late 1880s the factory was reportedly producing 5 million dolls a year and employing a workforce of 900 between its factory workers and outworkers.

It was during this period that Hertwig began offering its ABC series of doll bodies. These bodies were made of the Nanking fabric with the added novelty of printed designs. These designs were intended to supply a doll with “educational” value. Prints included alphabets, math equations, flags of the world, floral identifications, pastime games, and historical references.

In 1894 Fred Kolb, who was the manager of the doll department for the American wholesale distributor Georgie Borgfeldt contracted with Hertwig to supply dolls for his firm. In 1895 Hertwig registered a German design patent for a line of “Pet Name” heads (DGRM 49 131) for dolls on their alphabet series of bodies. These dolls were supplied exclusively to the American wholesaler Butler Brothers. The dolls had names molded as part of their front shoulder-plate. These designs include the names Edith, Esther, Florence, Mabel, Pauline and Ruth. The names of the dolls were another novelty point for these dolls, to set them apart from other company’s products but could also be included in educational-value marketing as they promoted reading and spelling. The write-up in the 1899 Butler Bros. Christmas catalog described this line as “Undeniably the best educational doll in the world. Plump well-made bodies covered with letters of the alphabet, illustrations, and names of pictures spelled out.”

In 1904 additional name designs were registered, these were Agnes, Bertha, Dorothy, Ethel, Helen, and Marion. Despite the many claims of the educational value of these dolls this collector cannot help but think that this education was subliminal at best as most children playing with their dolls would probably have dressed them, covering their bodies. This may explain why so many of these bodies are still clean and bright when found today, often the only wear to the fabric coming from the acidic sawdust with which they were stuffed.

Hertwig and Company would survive two world wars. In 1953 the factory was taken over by the German Democratic Republic (commonly referred to as East Germany). The business closed down completely in the 1990s.

The hunt for these dolls is truly a novel educational experience for collectors as we seek to find the various educational bodies in all their sizes and in differing head styles. 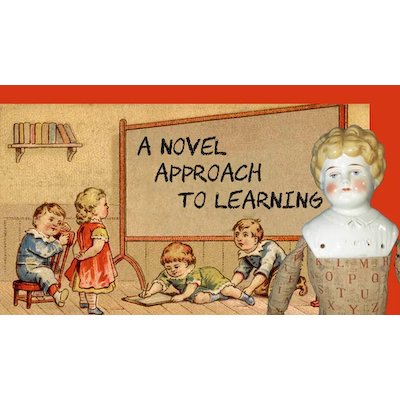