Offering the Hand of Friendship

Posted Fri , May 28th, 2021 at 2:59 pm
by Ruby Lane
As we once again celebrate World Doll Day on June 12th and our thoughts turn to sharing friendship through dolls, we are reminded that dolls have often been ambassadors for understanding and kinship between people everywhere. This concept has played out many times in the past century and a half and continues today.

Dolls have been, and continue to be, used in many ways to foster understanding and love between people, enabling diverse cultures to extend the hand of friendship to others. One of the most notable of these exchanges began with a dream of understanding and fellowship in the heart of a missionary working with Japan. Reverend Dr. Sidney Lewis Gulick, born in 1860, was educated at Dartmouth College receiving his liberal arts degree, and Yale University and Oberlin College earning Doctor of Divinity degrees from both.  He was ordained as a Congregational minister in 1886. His career took him to Japan where he served for 26 years as a missionary for the American Board of Commissioners for Foreign Missions. During his time in Japan, he was a professor and lecturer at both the Doshisha University in Kyoto and the Imperial University of Kyoto.

Returning to the USA in 1913, Gulick became increasingly concerned about the prejudices and inequality suffered by most Asians in America at that time. To address these concerns he turned to working for international justice and good-will by serving with the Federal Council of Churches of Christ in America, the American Branch of the World Alliance for the Promotion of International Friendship Through the Churches, National Committee for Constructive Immigration Legislation. In 1926 he was instrumental in forming the Committee on World Friendship Among Children. The aim of Gulick and this group was to use dolls as a means of instilling in children the concepts that all people were neighbors, with shared common experiences, and that understanding and good-will among nations was desirable and achievable.

To these ends in 1927 the committee initiated a Friendship Doll exchange between the children of the USA and Japan. Their choice of linking these two cultures was no doubt underscored by both Gulick's time spent with the people of Japan and his recognition of the importance of dolls in the Japanese culture. The centuries old observance of Hina Matsuri (Girl's Day Doll Festival) made the act of sharing dolls recognizable to the Japanese children who would receive the dolls sent to them from America. American school-age children were encouraged to donate dolls and funds to the project. Response from schools, community groups, churches, and organizations such as the Girls Scouts was enthusiastic with 12,739 American dolls gathered to be sent to the children of Japan.

Each of the dolls gathered was accompanied by its own passport, letters of friendship from American children, and travel tickets. The doll passports and travel tickets were sent from the committee to the children working on the doll project at a cost of $1.00 total for the specially printed material and postage. These documents were in part intended to teach American children some of the requirements of being good visitors to foreign countries.

The dolls were sent to Japan in time to be distributed to coincide with the Hina Matsuri celebration on March 3rd. This celebration had ancient roots in rites that were observed to remove evil and bring good fortune, over time the focus shifted toward giving thanks and good wishes for the health and welfare of female children. When the American dolls arrived in Japan they were warmly greeted. Many cities receiving dolls had welcome ceremonies for them. An article in the New York Times on March 4, 1927 recounts one such reception held in Tokyo. Gathered for the event were Japanese and American dignitaries as well as American and Japanese schoolchildren. Speeches of friendship were made; songs were sung and candies were distributed to the children as the dolls went to their new homes.

The Japanese people responded with thanks to this gesture of friendship by reciprocating with dolls intended for the USA. To that end, 58 Torei Ningyo (Dolls of Gratitude) were commissioned from Japanese doll makers and paid for by Japanese schoolchildren. These dolls and their possessions were sent to the USA as ambassadors of goodwill. The dolls eventually traveled to American families where they too were warmly received.

Despite the inroads to understanding that were laid down by Reverend Gulick and his committee's work the hoped-for mission of understanding and acceptance was side-tracked by world political disparities and many of the dolls would be sent into hiding or destroyed during the WWII years. Fortunately for the world and for the dolls, research in recent years has stimulated public interest in these dolls and their stories, making them once again emissaries of peace and empathy.

Moving into the 1960s life in America seemed to be poised for great accomplishments and a bright future. In 1961 John F Kennedy became the youngest citizen to be elected to the Presidency. He and his family symbolized a sense of potential and brought a freshness to the national outlook.  During his Presidency many foreign dignitaries presented world costume dolls to young Caroline Kennedy and many average citizens from countries around the world sent dolls and soft toys to the White House for both of the Kennedy children. It has often been remarked that dolls were sent to Caroline because it had been such a long time since a young girl was living in the White House but doll collectors are especially cognizant of the greater meaning of these cultural artifacts. These dolls were once again stepping into the role of acting as ambassadors. Being the embodiment of the cultures who created them, the dolls offered opportunities for understanding and appreciation of other world cultures. In 2003 the collection of dolls found its way to the JFK Library in Boston Massachusetts where they were showcased in a special exhibit which ran from November 2003 to November 2004. This exhibit not only reflected a piece of American history but once again allowed the dolls to fulfill their broader mission of forging links between all people.

In what would feel like coming full circle, in 2015, while serving as US Ambassador to Japan, Caroline Kennedy would continue to be a part of the story of using dolls to strengthen friendship between cultures. During her childhood a Japanese woman named Ms. Tsuyako Matsumoto had sent a set of Hina Matsuri dolls to the Kennedys at the White House. Ambassador Kennedy upon seeing the Girl's Day festival in person during her tenure in Japan, determined to bring the dolls back to Japan for exhibit. The dolls were sent from the US National Archive and displayed at the Embassy in Tokyo. In conjunction with this display Kennedy was able to locate the original donor and reciprocate the act of kindness and generosity that the dolls symbolized by gifting the then 93-year-old woman with an "American Girl" doll by Pleasant Company as a thank you.

These stories are only a few among a rich history of dolls being used to promote understanding, acceptance, equality, and peace between all peoples. Today's doll collectors and doll makers are privileged to become a part of this ongoing story by sharing dolls as a means of forging friendships and making a better world. 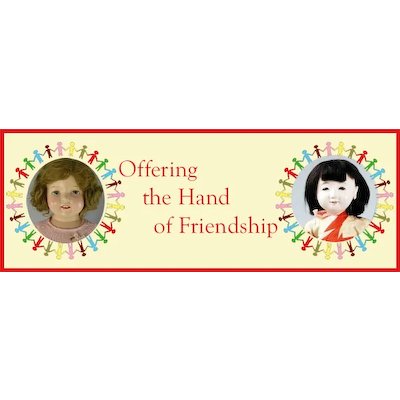