Posted Wed , Jul 28th, 2021 at 2:08 pm
by Ruby Lane
Taking their place alongside the wooden dolls of antiquity are the many wonderful wooden dolls created by the doll artists of the 20th and 21st centuries.

Mid-20th century in American saw a growing interest among artists in the area of doll making. Many of these talented individuals turned to carved wood as their preferred medium. Not only was some outstanding art produced during this period but many of these creative people would help further the hobby of doll collecting and set the standards for both doll artist and collector organizations.

Wood has a long history in the world of dolls with some of the earliest known examples being of this commonplace material, but the artists of the mid-20th century sought to bring new interpretations to these time-honored forms. The dolls produced by them run the gambit from simple to elaborate, but all are imbued with the spirit of their makers and are a joy to add to any doll collection.

Mary Whittier of Bow, New Hampshire was born in 1901. As a young girl she took to carving little figures from pine. She used her grandfather’s jack knife and a small hack saw. Out of this beginning she developed the procedure she would use for all her wooden doll making. Mary would start by pencil sketching the rough outline of the doll onto a block of wood which she then rough-cut with the hack saw. After that she would proceed to carve the head details with her jack knife. Small details such as the wrinkles on the faces of her older couples were achieved by pressing her thumbnail into the wood. The faces of the dolls were painted with diluted sealing wax which gave a soft, translucent finish. The features were sketched in with watercolors.

Mary costumed her dolls herself and paid close attention to the details of their garments. Most of her dolls were inspired by photographs with her most popular pair being Grandma & Grampa Hodges based on a couple from Sandwich, NH. She also did children and even produced figures of George & Martha Washington. Mary sold her dolls on her own through the 1920s and was one of the first craftspeople to be asked to join the League of New Hampshire Arts & Crafts when it was founded in the 1930s. Her dolls were sold exclusively through the league’s shop in Concord, NH for many years to come. Later in her life she moved to Hooksett, NH where she continued her doll making. Mary Whittier died in 1978.

Avis Lee of Chicago began carving dolls in 1939 after she graduated high school. Avis had always liked to whittle as a pastime and one day she decided to actually try making a carved object. The end result was a little doll. Avis liked to study the people she saw in her daily life, trying to remember their facial expressions. She would then translate these expressions into her character dolls.

Avis did all steps of her doll making on her own. The wood for the heads, hands, and feet was first rough cut on a band-saw, then chiseled and carved, sanded and pumiced. The finish she used was a combination of paint and stain applied in her own secret process. The doll’s cloth bodies were made of a wire armature which was padded out w/cloth and given a cloth covering. Her dolls ranged between 10 and 14 inches in height and were made in open editions, although they were all slightly different because they were hand made.

Lee produced a series which she called the Americanettes. This series depicted historical figures such as Betsy Ross, Daniel Boone and Carry Nation as well as everyday people from America’s past like school marms, organ grinders, & peddlers.  The Americanettes had cotton-mâché wigs. Another series of dolls she made from 1943 to 1949 were called Tykes. These child dolls had wooden heads on cloth bodies and used yarn for hair. The Tykes series consisted of 65 different characters. In about 1944 she began calling her adult dolls Little People instead of Americanettes, initially they still had cotton-mâché hair but eventually she went to using carved hair on them. Many of the dolls made during the Little People era were one of a kinds or editions of 2 or 3 dolls.

Lee had considerable success with her dolls, selling them through Marshall Fields for many years. Also, in the 1940s Lee made her version of “Captain Jenks” for Kimport. This doll was offered as part of their United States Series. For six years Lee made dolls full time, she related that the dolls took over her life and that she would often work on them at all hours when she was caught up in a particular piece. Finally, she decided to limit her doll making to part time. In 1955 Avis discovered that she did not own many of her own dolls so from that time on made them only for herself. In 1960 Lee began to get involved with wood sculpture and moved away from doll making.

The Ozark region running through Kentucky and Tennessee also has a long tradition of wood carving and during the 1930s doll makers such as Mrs. Annie Williams, Mrs. Orlenia Ritchie and Polly Page made folk-style wooden dolls. But perhaps the best known of doll makers from this region was Helen Bullard. Born in Elgin, IL, Helen moved to Tennessee in 1932.

By 1949 Helen was looking for a means of making a living at home. She decided to try her hand at carving. Inspired by the wooden dolls being made at Pleasant Hill Academy in Tennessee she carved a wooden girl doll of her own. When she developed a doll she liked she taught some of her neighbors how to sew the little dresses for the dolls. She relates that the dresses were piling up faster than she could use them so she began to teach the women how to carve the bodies as well. Within three months she had developed a full-fledged cottage industry.

The dolls were marketed under the name Holly Mountain Dolls, after about two years this was changed to Holly Dolls. Holly Dolls’ products included “Miss Holly” and the “Tennessee Mountain Kids.” Tiring of the repetitive nature of this work Bullard turned in 1954 to carving one-of-a-kind dolls and small editions for her own satisfaction. She created “the Rebels” series, a set of women who depicted the awakening spirit of independence that led to the Women’s Rights Movement. She created “Barbr’y Allen” and her dulcimer, and many other dolls and doll sets depicting historic characters. She carved her own version of the doll “Hitty.” In 1969 she was a founding member and the first President of NIADA.

Bullard’s dolls were carved of Horse Chestnut. She felt that the beauty of her work lay in the simplicity, control, and understated style she preferred. Her dolls had features painted with casein paint and oil-stained hair but the skin was not painted, only sealed with lacquer so that the natural color and beauty of the wood could be seen. She started her doll making process with blanks of wood cut for her by a local cabinet maker. She then carved the pieces, peg jointed them, painted features, sealed them, and costumed her dolls. She said that rather than trying to create actual portraits of specific people she tried to capture the characteristics and spirit of the time and type of person she was depicting.

Just before the advent of WWII Carolyn John was working as an art teacher in Morristown, NJ. One day she decided to try doll making as a lesson for her students. The result of this project was a beeswax doll. The interest in doll making stayed with her after that first experience. Then one Christmas she found herself looking at carved wooden crèche dolls and decided to try carving a doll. At first, she tried using balsam, but didn’t like the texture. The shop teacher at her school suggested that she try white pine instead. She found this much more satisfactory to her purpose. During WWII when could no longer buy pine for her doll making some friends of hers allowed Carolyn to cut all the pine she wanted on a piece of property they owned. This doll artist not only made her own dolls but gathered her own raw materials!

John made many theatrical celebrities in doll form including a commissioned piece of Helen Hays in the play Happy Birthday which was given to the actress. John’s dolls had carved heads, hands, feet (sometimes limbs) and were painted with matte water colors. A few of her dolls had wax and silk applied over their wooden faces for a softer look. The hair on her dolls was usually made of suede although sometimes she used leather or silk floss. John related that she especially loved the research and costuming aspects of doll making.

Carolyn did make some dolls for Kimport; these were both one-of-a-kind pieces and small editions. Her dolls are signed on the bottom of the foot in pencil or ink. She was still working in the early 1950s but by 1968 Kimport reported that “in recent years she has not been active in the doll making field.”

Sherman Smith’s doll making career was serendipitously begun when he became incapacitated by a series of heart attacks in 1955. During his convalescence he began carving small objects in wood. He exhibited some pieces in the Utah State Fair in 1957 and won several prizes. When members of the local doll club saw his carving, they encouraged him to try carving dolls and so began a new calling for Smith.

Smith went on to carve numerous styles of peg-jointed wooden dolls, usually in small sizes. Alongside his simpler designs he also made dolls which included such carved details as hair bows or sideburns. He sold his dolls directly, as well as through places such as Kimport for whom he made his version of “Hitty.”

The artists highlighted here are but a handful of the many gifted individuals who expressed their doll art in wood. The work they initiated and the standards they helped to establish paved the way for the wooden doll artists of today and tomorrow. 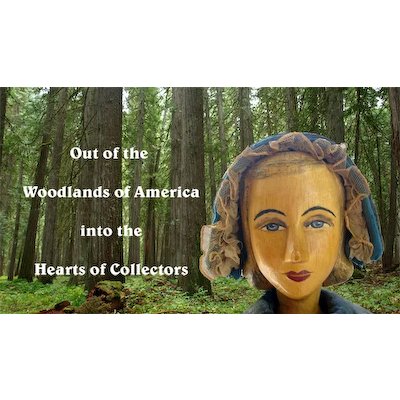